Torrevieja is located amongst lagoons, on a great plain, a destination of great importance. The current municipality grew next to a tower (Torre), the old one (la Vieja), which gave it its name along with some natural characteristics that have marked its history and its daily life. The area boasts some splendid beaches, with which it has developed its tourist capacity in combination with its seafaring and salt-making tradition. Today, also, the production of Salt, one of the main European producers, has a competitor in international recognition, the Cuban dances and its International contest, declared as being of International tourist interest, which celebrates in homage to the “Torrevejeneses” that traded with Cuba, colony from which they brought these melodies.

For sightseeing in Torrevieja you can enjoy the harbour, the fish market, the Church of La Inmaculata Conception, the Iglesia de Nuestra Señora del Rosario, tour of the S-61 Delfin submarine and the museum of sea and salt. Torrevieja is surrounded by the salt lakes of the Laguna Salada de la Mata and the Laguna Salada de Torrevieja and as a result the climate is meant to be very healthy especially for people with arthritus.

The salt lakes are protected and form a natural habitat for numerous protected species of bird such as the greater Flamingo and Montagu’s harrier.

Torrevieja is almost becoming a city it is expanding so rapidly and as a result facilities are very good with three excellent hospitals. There are also private and national health clinics with many doctors and dentists of all nationalities.

Property in Torrevieja is popular with many north European property buyers as it is a seaside city and centre of tourism in the south of the province of Alicante. Torrevieja is situated about a 50 minute drive south of Alicante and 10 minutes from the Orihuela Costa. It was originally a salt-mining and fishing village due to its location between the sea and two large salt lakes, giving Torrevieja its healthy micro climate. This 20 km stretch of coastline features six large beaches – La Mata, Cabo Cervera, Los Locos, El Cura, Los Náufragos and Ferris.

Torrevieja itself offers a wide range of shopping facilities as it contains around 2,500 shops. There are numerous sports clubs, sports facilities, schools, hospitals and a great shopping centre “Las Habaneras”. 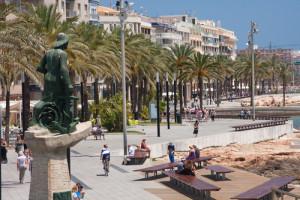 The Zenia Boulevard shopping mall is right on your doorstep, approximately ten minutes drive south. The largest shopping centre in the province, described by many people as a small city, it has streets, squares, fountains, daily concerts and events, all creating an enjoyable and friendly atmosphere. Designed for both enjoyment and entertainment, there are over 150 shops including Primark, Leroy Merlin, Media Markt, Zara, H&M, C&A and many more including a mouth watering selection of places to eat.

For golfers, there are some of Spain’s top courses within easy reach. Villamartin, Las Ramblas, Campoamor and Las Colinas are only a 15 minute drive away with many others, including the 3 famous La Manga courses, just over a 40 minute drive south down the AP7. Torrevieja also has a marina with the Real Club Nautico, where sailing and rowing is taught.

Flight access to the area is excellent with two main airports nearby. Alicante airport is a 35 minute drive away and Murcia airport is just 30 minutes.

So, if you love golf, shopping, sunshine and the beach take a look at our latest selection of properties for sale in Torrevieja.

HelloX
Would you like us to help you find a property?Yes